Axie Infinity has a system called scholarship that lends Axie to players and shares profits, and I use that system to hire nine scholars.

There is a possibility that you may fall into an unexpected pitfall if you only look at the good part of “earning easily with unearned income”, so I will tell you the reality of the manager here.

Canyou
In this article, I’ll share some real information about the life of a player/manager and my interactions with scholers, as I experienced.

Daily Life of Manager and Player

Canyou
First of all, I will tell you what I do in my daily life.

I am a salaried worker who currently works for a general company, and the regular time is from 9:00 in the morning to 17:30 in the evening.

Basically, I work from home and do not commute, so I can use my morning and evening hours freely.

I work for the company during the day, play Axie Infinity myself at night, and respond to inquiries from scholars. 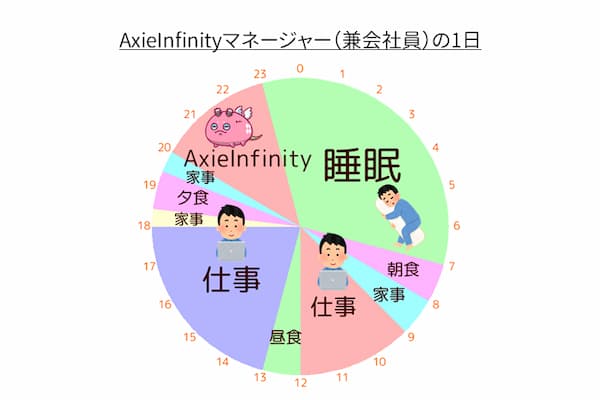 The time actually used for games and responding to inquiries is 2-3 hours a day.

Canyou
When I receive an inquiry from scholar, I think I can’t answer if I don’t know the contents of the game. So I play it myself but I don’t have many inquiries about the content of the game in reality.

What kind of Inquiries do I get from Scholar?

From July to August 2021, a number of users started Axie Infinity and there were quite a lot of inquiries about this due to server malfunctions.

In the end, I solved it by saying, “It looks like a server problem, so please wait for a while and try again.”.

Actually, there were many cases of server malfunction, and I could not log in even though I regenerated it.

Canyou
This also settled the time.

My Smartphone was stolen 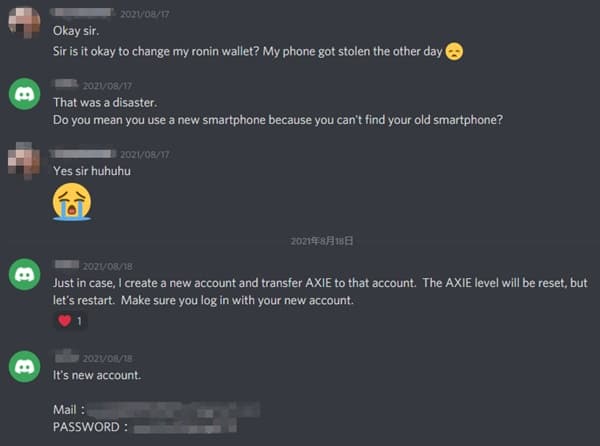 “Actually, my smartphone was stolen …”

This is a story about one scholar and it’s a rare case.

I got 0 SLP for a few days in the scholar management tool, so I asked at Discord “Are you sick? Is it okay?”.

Then the answer returned was “My smartphone was stolen.”.

After that, I created another new account and now he is still playing.

Canyou
Some people have no means of contact when they lose their smartphone, so it is better to contract a scholar who has a computer or tablet in addition to their smartphone.

I want you to Raise the Reward Ratio

“I want you to increase the percentage of rewards if possible.”

This inquiry sometimes comes as I remembered.

Most of the case, scholars who are earning not so much and aren’t doing their best asks me.

I think he’s trying to increase the revenue share by raising the ratio, but he can make money if he do his best.

So, I’ll ask him to make an effort.

I give each scholar an Axie with almost the same composition as me, and there are other scholars who can earn money in same condition.

I think that it depends on his motivation and effort.

Canyou
I also told that I’ll change the reward ratio if you earns a certain amount of SLP in a month (It is a hurdle that can be achieved if you do his best).

I want You to Change Axie

“I want you to change Axie if possible”

The scholar, who can’t earn SLP always talks about this once as much as he talks about reward percentages.

I am giving over an Axie that can win to some extent, and I have not paid the initial-investment yet, so I can not accept it as it is.

There are also scholars who actually make money with the same composition.

I honestly tell them “If I can paid my initial-investment, I’m thinking of buying a new strong Axie. Now I don’t have any extra money.”.

As a result, all scholar so far will not quit and try to do their best with the Axie that they have now.

If the investment can be paid in the future, I would like to consider additional investment while considering the return on investment.

Canyou
This is a relationship between people, so I think that it will have my feelings understood even if the country changes.

I want you to Change the Quota

“The rules of the game have changed, so can you change the quota?”

There are frequent rule changes to prevent earning weak scholars against oversupply of SLP in Axie Infinity.

At the beginning, if we played the game normally and cleared the daily quest, you could get a lot of SLP.

But the environment has changed where we can not earn enough SLP only daily quest.

If we can’t make money just by playing games normally, some people think that it’s difficult to play games.

However, when I look at the results of that scholar, I feel like “You’re not playing game properly.”.

The good point of Axie is that we can earn money if we have a certain level of Axie.

This “properly” is the level of “log in every day and play seriously”.

Canyou
There are some parts that you can’t know how much you can earn if you do your best unless you actually play the game, so I think it’s better for the manager to play the game himself, even if he’s not a kid.

When will you Pay the Reward?

“When is the payout day?”

This is also asked quite often.

In the first place, it is clearly stated in the contract …

I wonder if you haven’t read it properly …

I’ve asked many times, so I made a document about payment rules with one PowerPoint and send it when asked.

Canyou
Everyone makes similar inquiries, so this kind of standardization is important.

Do I need to Re-sign the Contract?

“Do you have a new contract?”

This is a lot of inquiries at the end of the first month.

Hmm … haven’t you read the contract?

Canyou
There might be language barriers, but it was an inquiry that reminded me that some people have not been able to confirm the contract properly. Communication is important!

As you have seen so far, there are no inquiries about the contents of the game.

I’m not good at games, but I think that even people who want to be a manager can handle it if you can communicate.

Canyou
The current situation is like this, but I will add content when new one comes out.
Manager manual
Axie Infinity
参考になったらシェアしてね！