[Axie Infinity guide] What is a terminator? Explains speed and correct usage

If you are collecting information for Axie Infinity, you will hear the word “terminator” a lot.

In conclusion, Terminator is Axie with the cards in the image below.

Terminator is an English word [to end] (from Kotobank)
The terminator was so strong that it was named like this.

Terminator [strong], what is strong is …

Why are terminators used by so many people and why are they so strong?
This article describes the caracteristics of Axie Infinity’s terminator.

筆者 akarui
It also explains the points to note when buying at the end and countermeasures!
TOC

First of all, the terminator is basically all four cards, so if even one is different, the balance will be lost and it will be weak.

筆者 akarui
Please be careful if you are thinking of buying it.

The abilities of Terminator’s abilities (cards) are as follows.

Therefore, when fighting one-on-one, if you fight the terminator under the same conditions (every Round 2 energy recovery), you will be stunned many times and you will be tossed and lost without being able to attack and defend as you wish.

[Effect of debuff]
Stun
= The next action is missed.
(Attack and recovery are invalid, an only shield is activated)
When attacked, it penetrates the shield and reduces HP.

Terminator is a card ability that can stun your opponent in both offence and defence.

・ If the guard is broken, stun the opponent.
・ Use 3 or more cards to stun your opponent.

Stan cannot solve until the axie misses its attack or is attacked.

Stan can ignore the guard and attack, so if the remaining HP is low, no matter how hard the guard is, it will be defeated by Stan.

Stan’s strong point is that he will definitely succeed.

You may think, but there is a [Fear] card which is in the movement to block the behaviour of the other party.

Effect of abnormal condition [Fear]
If it was Fear, the next action would be missed.
However, if someone moves, Fear will be canceled.

Fear can block actions in the same way as Stan, but it cannot be used effectively as an abnormal condition unless the order of actions is properly meshed.

[Stan] who always creates his own advantageous state without bargaining with the other party is very strong.

[Terminator who is good at attacking that stun = strong. ]
This is what it is.

The standing position of the terminator is the best

To explain the charm of Terminator, it is indispensable to say [( Leptile) a hybrid that has three Bug attribute abilities even though it is a Dusk ].

It’s a little complicated,
I can’t talk about Terminator without this.

Of course, the ability itself is strong, such as stunning the opponent with TINY TURTLE (chomp) and solidifying the guard with SNAIL SHELL,
If you check the compatibility of Axie[THORNY CATERPILLAR] Is a bug attribute, so it is difficult for attacks to pass through aqua and bird. 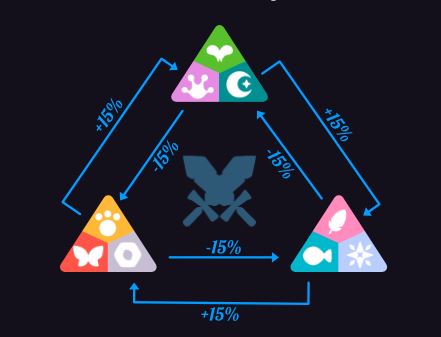 However, the effect of the ability “If the target is in the debuffed state, it will do 130% damage. ], So even aqua bird opponents who are not good at it can put out enough firepower and fight.

On the other hand, even if you attack the terminator from the opponent’s bird aqua side, you can not get the ideal firepower because it is a weak attribute.
In addition, Stan cannot be defeated at all.

Bird Aqua is often placed at the very end, which is also the reason for increasing the terminator win rate.

akarui
So what about Terminator from the perspective of Beast?

However, since there is a stun, it cannot be defeated without sufficient energy.

About the speed of the individual

The dust terminator is strong.

One of the attractions of Terminator is speed (order of attack) is also very important.

Obviously , the one who collapses before the opponent loses, so basically the speed of the status is fast, and it is advantageous to be able to attack faster than the opponent.

Here is the introduction of [Dusk Terminator].

[Dusktor Minator] is not a Reptile or Bug Terminator, but a Dusk Terminator.

akarui
Details of individual differences will be explained in a separate article!

I will omit the details, but if the individual is different, it will make a difference when trying to make SPEED the fastest.

If SPEED is prioritized in Terminator

This is how Dusk is the fastest.

akarui
Bird individuals will be faster, but because of the balance of attributes I explained earlier, Reptile Dusk is the BEST.

So if you prioritize speed, the terminator is,
Dusk is better than Reptile.

Please keep this in mind.

The speed minus condition is strong.

And by combining Dusk x Speed Minus debuff (abnormal condition), you can increase the winning percentage.

Speed minus debuff is a corner part[LAGGING] is.

The strong reason is[LAGGING] Debuff with[THORNY CATERPILLAR] As with the combo that can increase the amount of damage,
It is a point that you can slow down the opponent’s speed and make the next Round first.

akarui
In my opinion, people with MMR 1500 or less do not include speed debuff in their strategy.

If you plot the speed when you are hostile, it will be in this order.

and[Speed-] To the other party …

With the fastest Dusctah Minator, you can make a first strike against Aqua.

[Speed-]If you can stack them, you can act faster than Bird!

As far as you can see, the value of Dusctah Minator is very different unless it is S46.

akarui
It’s surprising that even Reptile can take the lead.

In this way 0 cost[LAGGING] By stacking two cards, you can attack the next round first, so the range of strategies will expand.

When I buy a terminator from now on, I think I’m wondering which one to buy because the prices are different even if they are the same terminator.

As you may have noticed by reading this far, the value of Terminator varies greatly depending on whether it is the fastest Dusk (Dusk Speed 46) or not.

Since the same terminators may fight against each other, it is better to be as fast as possible, and it is a big advantage in the match that it is easy to take the lead against the aqua opponent.

What are the weaknesses and countermeasures of Terminator?

I think you understand the strength of Terminator, but what should you do when you fight Terminator?

As you know, Axie Infinty can’t change Axie’s ability cards, so if you already have a deck, you may need to buy it again.

Even if you buy it again, you may decide to buy it again if the winning percentage & MMR increases and the number of SLPs you earn increases.

Read the timing of Stan

Terminator has a very strong card combo, so the attack method tends to be monotonous .

So it’s easy to read when it’s stunned.
First and foremost, it is important to be stunned and select the cards that you can miss in the best order.

When you attack, you just miss and the attack does not hit, so the shield increases.
The best cards that are effective at the timing of stuns are 0-cost (weak) cards and high-shielded cards such as Pumpkin and Red Eye .

Bird attribute[post-fight] Has high firepower at 0 cost, but it has the effect of [30% damage to yourself if the attack is successful], so it can be effectively used for stuns.

Should I beat it first?

Depending on the compatibility with your party, the terminator is [ very strong at the last one ], so if you have an Axie with a backdoor in your deck, it is also effective to defeat the terminator first.

If you have a backdoor car, try to consciously incorporate it into your tactics.

It is unexpectedly effective to block the 0 cost of the square card, and the terminator has 0 cost.[LAGGING] By having, even when it becomes the last one, it will stably attack by utilizing [Stun when using 3 or more].

Also, by speed debuffing, the effect that the attack of the tail becomes 130% will be activated, so
The attack power of the terminator can be greatly reduced.

However, since [ SNAIL SHELL] is still alive, this attack cannot be done as expected.
If your Axie doesn’t have 0 cost, adjust your energy and fight on the assumption that you will miss it with a stun.

(Because the opponent’s terminator also often saves energy, do not attack hard)

sleep debuff is a condition that can reduce HP by ignoring the opponent’s guard.

With this debuff, you can disable the opponent’s [Stun the opponent when the guard is broken] SNAIL SHELL: Sticky Goo, and you can also directly scrape the HP, so it is very easy to defeat the opponent’s Axie.

However, the other party[chomp] exist, there are cases where this attack cannot be done in the first place, it is necessary to save enough energy or incorporate a 0-cost ability card well.

There is also an ability that deals 40% of the damage received to the opponent when the opponent makes a melee attack.
All Terminator attacks are melee attacks , and this card itself has a high defense fee, so it is a very effective ability.

The most effective terminator is a debuff that blocks melee attacks.

This card itself has no offensive or defensive power, but if you can attack with this card, your opponent’s terminator cannot do anything.

If you can’t beat Terminator and aren’t good at thinking about your opponent’s stun attack, I highly recommend purchasing Axie with this card.

If you buy … the fastest Dusk?

I hope you understand that if you want to use Terminator from now on, Dasuktor Minator is good.

However, the price changes between Reptile and Dusk, so I think it’s a good idea to decide how much winning percentage you want.

The Reptile Terminator is not weak, as Reptile can do more damage.

The terminator can only show its strength when it is the last one, so be careful not to put it in the wrong place.

Also, by preserving the cards and saving energy as much as possible, the winning percentage will increase when fighting 1 to 1 and 1 body 2, so it is a better tactic to keep without using cards after round 5.