What is Mystic Axie? -Why the super-expensive Mystic Axie is so popular-

If you’re an Axie player, you’ve probably heard of a very valuable Axie called mystic-axie. But I have never met a person who actually owns it. That should be that, as of 2021/10/16, the lowest price of Mystic Axie is 29.7 ETH, which is about $117,506 when converted. 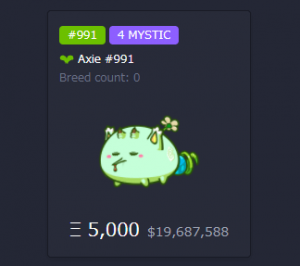 You might expect that the reason why Mystic Axie is high is that it is rare, but it is not only rare, but it also has the potential to become an individual that will play an active role in arenas and Axielands in the future.

In this article, I will explain about Mystic Axie.

What is Mystic Axie in the first place?

This expensive Mystic Axie.
I hope I can get it someday. However, you can’t get it by playing normally.

Also, is Mystic Axie born in bleed?
The answer is “NO”.

The original Axie is an ancestor and origin, and is the ancestor of the Axies we are using now.

A total of 4088 original Axies have been sold, of which it has been announced that [only about 30% were sold with mystic parts ].

This means that Mystic Axie was purchased by investors when Axie Infinity was founded.
Some investors may have owned it from the beginning of the sale to the present, while others may have resold it to make a profit.

At this stage, the only way to get Mystic Axie is to buy it at the marketplace.

Axie is divided into 6 parts, and any one of them should have mystic parts.

akarui
It has been announced that there are 35 types of misty parts in all.

Mystic parts will not be carried over even if they are bleeding (breeding).
However, the number of living organisms is very limited and does not increase, so it can be seen that it is extremely rare.

All 35 types of mystic parts are as follows.

It seems that the parts level goes up …

Not only is it highly rare, Mystic Axie is the only individual that can raise the parts level .

“What is the parts level?”

You have such a question.

The parts level is also displayed in the marketplace, and in fact, the ones we usually use are used in LV1.

akarui
It is written lightly in grey.

Mystic Axie can raise the part Lv, and by raising the Lv, it will be possible to demonstrate special abilities. (The following is an image of the development stage)

It can be inferred that special abilities not only change their appearance, but can also be used in combat. 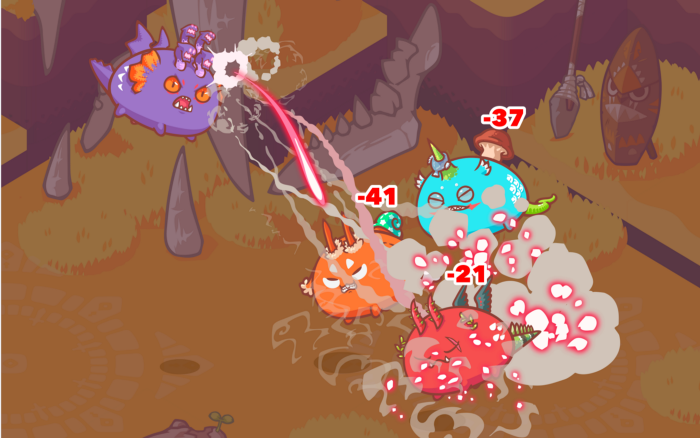 akarui
If you get much stronger in the actual battle, you will want it even if it is expensive!

However, it seems that this specification is not currently implemented. (Axie with increased LV has not been observed)

Information such as the above image is also released at the development stage, so the specifications may change in the future.
However, since Axie Infinity started, Mystic Axie has been continuously planned as a special treatment, so it is estimated that there will be no major changes.

As of 10/16/2021, we have not announced that there will be any changes to the specifications of Mystic Parts. Axie Land is about to be released, so it would be nice if Mystic Axie’s skills were released at that time.

akarui
Thank you for reading to the end!

Last but not least, we’re always keeping up with the latest updates on Axie Infinity and blockchain games, so if you’d like, follow us on our Twitter account.
If you have any questions or requests, please skip the reply on Twitter and we will read it. Thank you for your cooperation.