・ How to proceed in the early stages of Axie Infinity
・ What is Daily Quest?
・ Basic rules of battle
・ How to fight in the adventure mode
・ How to fight early in the arena mode
・ What do you do when you think you can’t win?
・ What is the next steps?

In fact, you may be wondering where to start …

So, I will introduce how to proceed in the early stages when the author who actually tried Axie thinks ” This is efficient! “.

NANA
Those who want to give priority to this method are those who have an Axie level of 15 or less now!

When you reach level 15 or above and it’s easier to get SLP in your adventure, see how to do the next step !

I will explain while looking at the actual game screen. 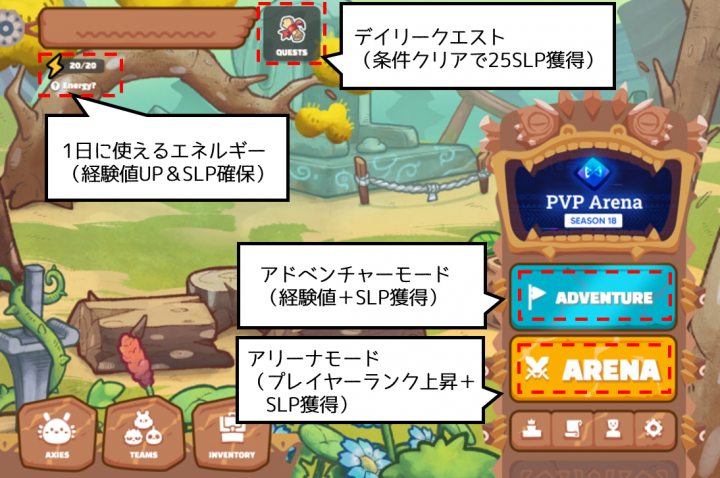 The first thing I want to do in the early stages is to raise the level of Axie . Therefore, follow the procedure below.

NANA
There is some basic knowledge that is not written on the game screen, so I will explain it one by one!
TOC

[Daily] Do daily quests without fail

The first thing I want to check is the daily quest.

Daily Quest is a system where you can get a reward (25SLP) on the day you achieve it.
You can check it from the box on the top page. 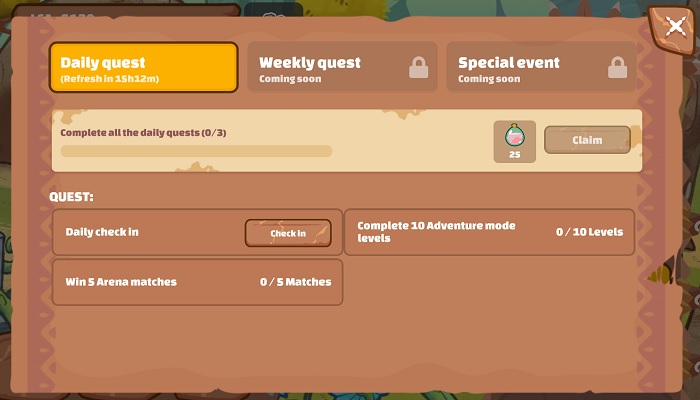 In Axie Infinity, the following three are set as daily quests.

It will be reset at 9am Japan time every morning, so if you want to collect SLP (virtual currency) efficiently, play every day .

However, you need to press Claim on the right side of the screen to get SLP.

NANA
If you don’t get used to the Claim button, you forget to press it …
I have forgotten to push it too.

If you press Claim properly, you should have more SLPs in your INVENTRY. 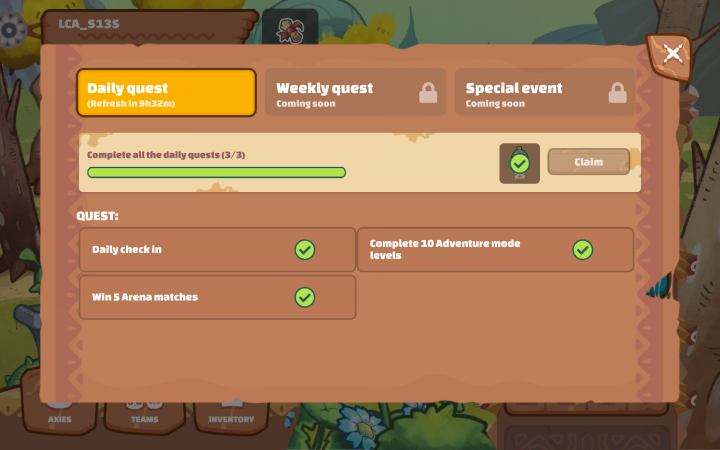 It’s OK if this screen is finally displayed!

Axie is a game in which 3 Axies with 4 cards form a team and fight .

The skill cards you can choose are randomly dealt each round, and you can get as many as you can for your energy cost. 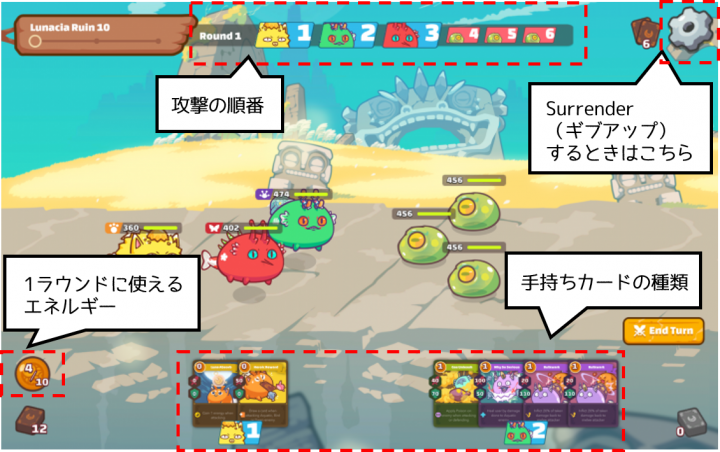 The energy cost that can be used depends on the mode.

While there are 3 Axies, 2 cards will be randomly added from these 24 cards each time. In other words, if you use two cards with the same parts of the same Axie, you won’t get them back for a while! !! 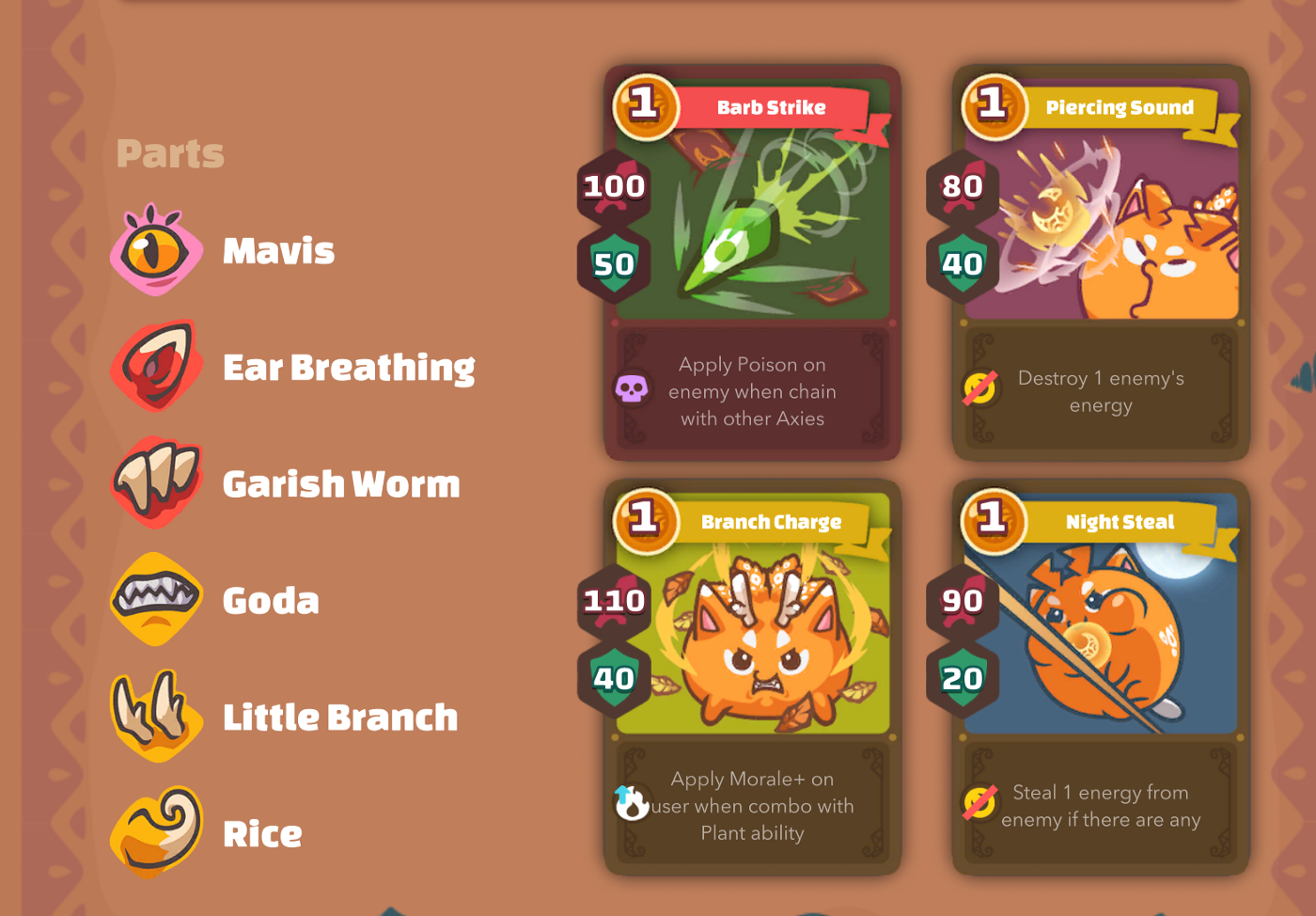 NANA
For example, if you say that the attack power is high with the ↑ card and use two Branch Charges consecutively, it will not come back easily after that.

Knowing this will help you decide when to use a card with your healing skills or a card that poisons you.

At the same time, if the opponent has the same card, you can read the opponent’s hand and fight with confidence if you use two cards and you will not have it for a while.

Find out the difference between adventure and arena!

As you can see, there are two ways to fight Axie.

In the early stages, it is recommended that you first get used to the battle in adventure mode and accumulate experience points.

“10 wins” is a requirement for daily quests, so let’s proceed until we win 10 first .

How to fight in adventure mode

Adventure mode is a format that advances by defeating enemies in order from 1 as shown below. 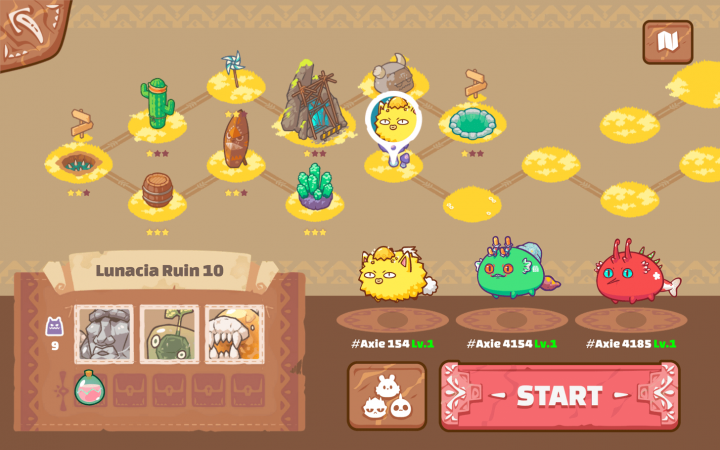 Before you start, we will tell you the basic information you want to keep in Adventure Mode.

・ Surrender (give up) is possible if you are about to lose (* If you lose, energy will not be consumed)

・ SLP (pink bottle on the left): The maximum number of SLPs that can be obtained in an adventure per day is 50 .

・ As your level goes up, your enemies will become stronger.

(This seems to be a guideline when clearing. Especially, there is no effect on experience points and SLP)

In other words, let’s clear many stages and collect experience points and SLP.

Since the maximum daily earned SLP is set to 50, we will first accumulate SLP50 here.

By the way, the experience points that can be obtained vary depending on the stage in which you fight. Let’s raise the level of Axie efficiently while using it properly.

Markers are placed where it is easy to accumulate experience points.

NANA
After stage 20, the earned SLP doesn’t change much, so you don’t have to forcibly capture it.

However! Be aware that if you raise the level too much, the level of the enemy in the adventure will also rise .

If the level difference from the stage is 5 or more, the enemy will become stronger, so if you want to defeat it quickly (however, the gained experience value will also increase), it may be good between Axie’s level 14 to 24.

How to read the battle screen

Next, I will explain how to read the battle screen.

Look at the order of the attacks, decide whether you are the first attack or the second attack, and cut the card.

The order of this action depends on the speed of Axie. (For the same speed, the one with lower HP ➡ Higher skill value ➡ Higher morals ➡ The order is decided in ascending order of individual ID.)

The lower left is the amount of energy that can be used in this turn (round).
Initially 4, it will recover 3 every round after that.

I can’t win … What if this happened?

It’s surprisingly easy to clear at first, but I think you’ll have a hard time around stages 5 and 10.

NANA
Let’s raise the experience value / Axie level and try again on the stage in front of you!

The higher the level of Axie, the higher the attack / defense power of HP and cards, so if you can not win, it is recommended to raise the level in the previous stage.

How to proceed in arena mode

Arena mode is a little different from adventure mode.

The point is the amount of energy that can be used.
Start with 3 energies at first, then add 2 each.

In Arena mode, you can earn SLP and increase your player rank by defeating your opponent.

Here’s what you need to remember in the arena battle.

・ The higher the player rank, the more SLP you will get.

・ You can still play after consuming 20 stamina, but you cannot get SLP even if you win.
Player rank fluctuates

NANA
But the winning percentage is about 50-60%, so it’s important not to worry if you lose!

Everyone is desperately doing Axie, so when you lose, you lose.
If you can learn the opponent’s card and establish your own way of winning, the winning percentage will increase, so let’s learn various things in the actual battle first. It is important not to be too depressed.

NANA
By the way, Axie has a limited period of season, and the rate changes once every time this is switched.

The requirement for the daily quest is “5 arenas wins” . For the time being, if you win 5 times, you can clear the daily requirements, so let’s do it until you win.

NANA
I’m still nervous … but I have to get used to it!

Things to review when you can’t win easily

Well, I actually tried adventures and arenas, but you might think “I can’t win at all !!”.

Possible factors for not winning are …

I’ll leave a little advice at the end.

Basically, if you don’t know your opponent or the cards and skills that you attack / defend, you won’t be able to stand up in battle.

The position of your Axie and whether or not it is compatible with your opponent will be decided depending on the card.

First of all, remember your own card! Remember the card of the opponent you think you shouldn’t lose next.

Don’t you think you can’t beat the well-hit team composition and Axie with similar parts?

For example, Axie who has this card as a set … It is called “Terminator”, and it is Axie that many people are struggling with. 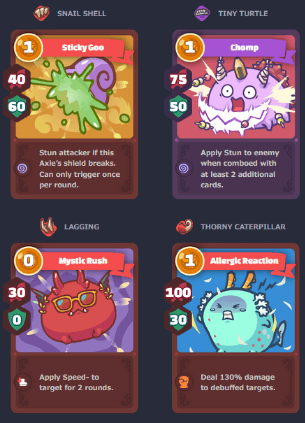 How can I win? You need to find a winning line with your Axie’s card.

There are also parties that scatter poison …

Grasp the cards against the enemies you like best and think about the winners!

Review the placement of your deck.

When you team up with your Axie, don’t you put it in a random place?

This arrangement … is actually very important! Unless you use a special card, the first Axie will basically be attacked, so it is recommended to put the Axie with less physical strength in the back row as much as possible.

You may be able to increase your winning percentage by looking at the combinations of Axies of top-class players and reviewing your Axie position.

If you want to know more about this formation, please also refer to the following article!

Overkill without preserving too much energy and cards!

Whether to attack or defend in this round … Read the opponent’s hand and get ready.

When trying to save skill cards, there are times when the opponent is so defensive that he cannot defeat him.

NANA
With this, the situation may be reversed at once. On the other hand, when you protect yourself, it is also a good idea to increase your defence and try to survive.

If there is a target that you can defeat by looking at the card, it is also important to think about the defense power of the opponent and fold it all at once!

NANA
However, if you blindly cut all the cards, you will run out of energy and cards in the second half, so be careful!
あわせて読みたい
【Axie Infinity】最初の3体の選び方｜勝てるデッキ完全解説 この記事を監修しているZoneです。 プロフィール：P2E Hacks エグゼクティブアドバイザー。初心者に向けて分かりやすくAxieやBCGに関する有益な情報を発信中。Twitterは...

Strong when energy and cards can be replenished

I mentioned earlier that you lose because you want to save cards and energy, but you can lose even if you don’t have enough energy or cards.

NANA
This balance is difficult … 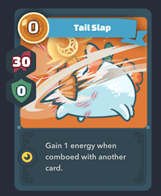 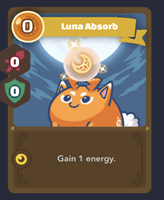 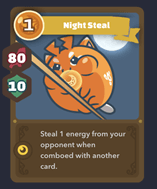 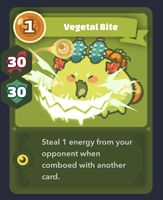 Reduce your opponent’s cards, increase your own cards … 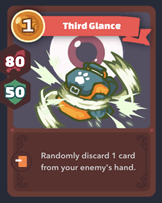 This is also part of the strategy, so I want to think about it when combining my decks, as well as

You need to be careful if the enemy has an opponent with such a card.

Don’t forget your daily complaints. What is the flow after the beginning …?

The flow explained so far is basically the flow at the beginning.

As you can see there is a daily quest, people who are doing Axie do it almost every day. It’s a form of stacking up steadily.

This is because you often analyze unfamiliar enemies and get lost in cards.
It should take less time as you get used to the procedure and play.

Then how long is the beginning? To those who thought

The guideline is until you can clear stages 15 to 20 in the adventure .
If you go this far, you will be able to earn 50 efficiently because the earned SLP will be about 7-12.

If you go to this point, let’s earn 20 stamina a day in the arena! The flow will be changed to the following.