The greatest trials comes when you have experienced the depth of Axie infinity.

TJ
To tell the truth, I had a hard time clearing Ruin 12 …

In this article, I will introduce all the tips for clearing Ruin 11 to 15 that I have struggled to find.

In addition to the standard skill that causes great damage, he also have lowers the attack power and stun debuff.

Moreover, I’m honestly tired of seeing them since it appears on all stages.

In Ruin2, that Little Rock appears.

Your opponent will use a lot of cards in the first round, so try to use as many cards as you can to improve your defense .

TJ
For that reason, save energy with Ruin1 as much as possible.

If you can defeat Ruin2’s Little Rock in the first round, your chances of clearing this stage will increase dramatically.

Red Jam, which appears in the front line of Ruin3, has defensive power and recovery cards.

So, you should use additional cards to defeat him.

Also, you need to be careful the enemy using a stun debuff, as damage will penetrate your shield.

It is no exaggeration to say that it is the biggest wall in the first half of ADVENTURE.

Because 6 out of 9 enemies are Little Rock , it’s really a wall (lol).

The screen will be narrow, so I hope Little Rock don’t come out.

TJ
The procedure and conditions when I cleared Ruin 12 are as follows.

TJ
It’s easy to write in words, but it’s quite difficult to actual try. ..

If you can clear this stage, Ruin 13-14 can proceed relatively quickly.

Cards with high defense are the followings. 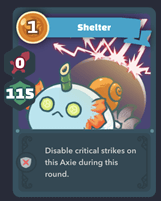 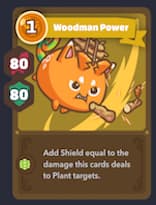 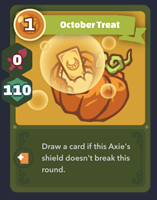 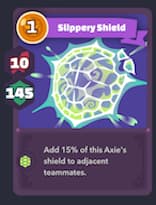 You can feel relax by playing this stage because Little Rock will not appear in this Ruin.

TJ
I don’t need Little Rock anymore, and want to ask him to leave.

Ruin13 is easier than Ruin12, but enemies use cards with stun effects, so be careful of shield penetration .

In this Ruin, the enemy uses Poison, so you should avoid long-term battles.

Poison takes 2 damage per poison debuff for every turn.

At first, it seems that the damage is not great, but this will be effective later.

TJ
So, if you can defeat the enemy, let’s attack even if the combination of cards is a little bad .

This action is to avoid being attacked by Poison as much as possible.

You’ll need the following cards to unlock the Poison Debuff, but you won’t need to buy a new Axie to clear this Ruin.

In addition, the Planter in the back-line has high HP and attack power, so I often wins at the last stand.

TJ
If you’re not careful because you defeated Little Rock, you’ll be surprised … (actual experience)

This is the last Ruin explained in this article.

In Ruin15, some enemies will use cards with new “Stench” debuffs.

Stench debuffs have the effect of not being attacked (if everyone is in the Stench debuff state, the front Axie will be attacked).

TJ
You might think lucky if the card’s attack power is low and you can’t attack it, but it’s dangerous.

For example, even if the front Axie uses a highly defensive card to be attacked, the next opponent’s attack will go to the back Axie.

You don’t have to be aware of Wave1 and Wave2 because the slowest enemy will use them, but Wave3 should be careful .

Therefore, it is also an effective strategy to use the card for Axie in the back and improve the defense power as much as possible.

In this article, I introduced the strategy information of Ruin 11 ~ 15.

The SLP and experience points earned when clearing Ruin 11 to 15 are as follows.

・The maximum SLP that can be obtained by clearing ADVENTURE is 50 SLP per day.
・Experience points are not available without consuming Energy (20 by default).
・The amount of experience you can earn depends on the level of your Axie.